The invention of the modern Christmas has been relatively recent.  Some claim that the modern Christmas was invented when Charles Dickens wrote A Christmas Carol in 1843.  Prior to 1843, Christmas varied between a pagan rooted solstice ritual and a Mardi-Gras type event where party goers travelled house-to-house demanding wine and food.  In the middle ages, Christianity replaced the pagan solstice celebration with Christmas.  However, the earlier version of Christmas was pretty rowdy.  In the earlier version of Christmas, a beggar was crowned the Lord of Misrule and went around the local community with a group of hooligans, demanding the best wine and food.  At one point, Christmas became so rowdy that it was actually outlawed from 1659-1681 in Boston.

Despite its non-commercial beginnings, Christmas has become a global economic stimulus for most businesses around the globe. In 2021, it is projected that Christmas holiday sales will again surpass a trillion U.S. dollars.

Christmas has resulted in the invention of many inventions, including:

The Invention of Christmas Cards 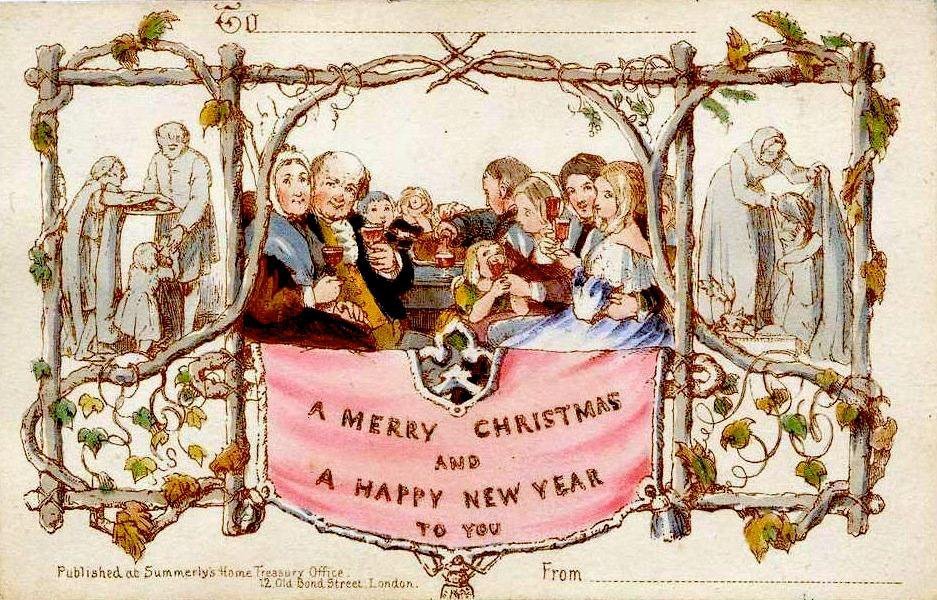 Henry Cole, the inventor of Christmas cards, printed this image onto 1000 cards and sent them to all of his friends around the United Kingdom in 1864.

While written correspondence including cards and letters have been sent between families and folks for centuries, Henry Cole is considered the inventor of the Christmas Card. In 1843 Henry Cole, a socialite was busy with his typical holiday activities. However, as a result of a recent expansion of the British Postal system and the advent of an inexpensive postage stamp people all over Britain were sending letters to each other.  Apparently, Cole was so busy he didn’t have time to respond to each of the handwritten letters he received.  As a result, Cole decided he would commission an artist to create an image which could be printed onto blank card stock and then he sent the preprinted card to all of his friends.

The Invention of Christmas Lights 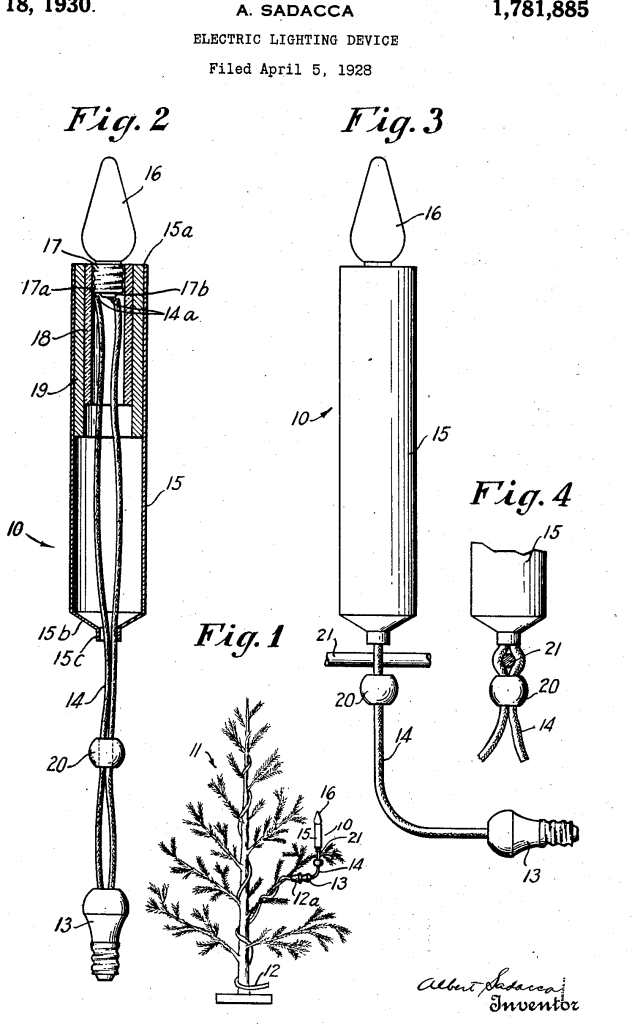 Lights were first put on Christmas trees in the 17th century by attaching candles to the branches. However, the candles were a large fire risk and many people simply didn’t do it or if they did, they did it for a short time on Christmas Eve.  While, Thomas Edison and Edward Johnson invented the first electric light strand, it was not until 1917 that Albert Sadacca, a 15 year old started to produce a multi-colored light strand, that electric light strands gained popularity as Christmas Lights.  Sadacca’s business, the NOMA Electric Company, went on to become the world’s largest Christmas lighting company until 1965. One of the Sadacca’s Christmas Light Patents can be found here

The Invention of Tinsel 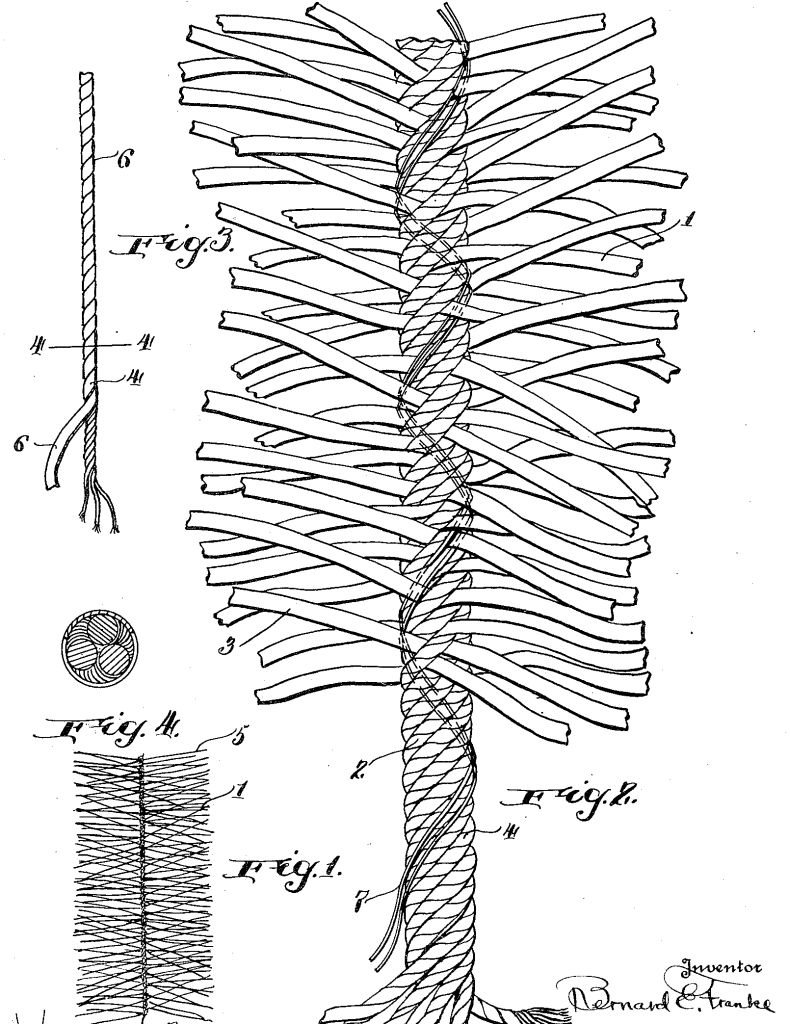 Tinsel, the thin sparkling strands which some folks draped over Christmas trees in the 70s, first appeared in Germany around 1610.  It was originally created from thin strips of material which were extruded from real silver. While the silver looked good, it tarnished quickly and was soon replaced by other metals such as tin or copper.  While these were metals cheaper than real silver, when the first world war started these metals were in high demand.  So aluminum was used, but this caused concern for fire then lead was used.  However, lead was poisonous.

By the 1950 Tinsel use on Christmas Trees nearly surpassed use of Christmas lights.  Today, Tinsel is created from PVC, a type of plastic.  An example of a Tinsel Patent can be found here

The Inventions of Candy Canes

According to some folk lore, the invention of candy canes was the result of a choir director in Germany using the sugar sticks to keep his children quiet during church.  Apparently, when the church was upset over the handing out of sugar in a solemn place, he bent the sugar sticks into staff’s to provide a religious reference.  Originally, the candy canes where one color, white. 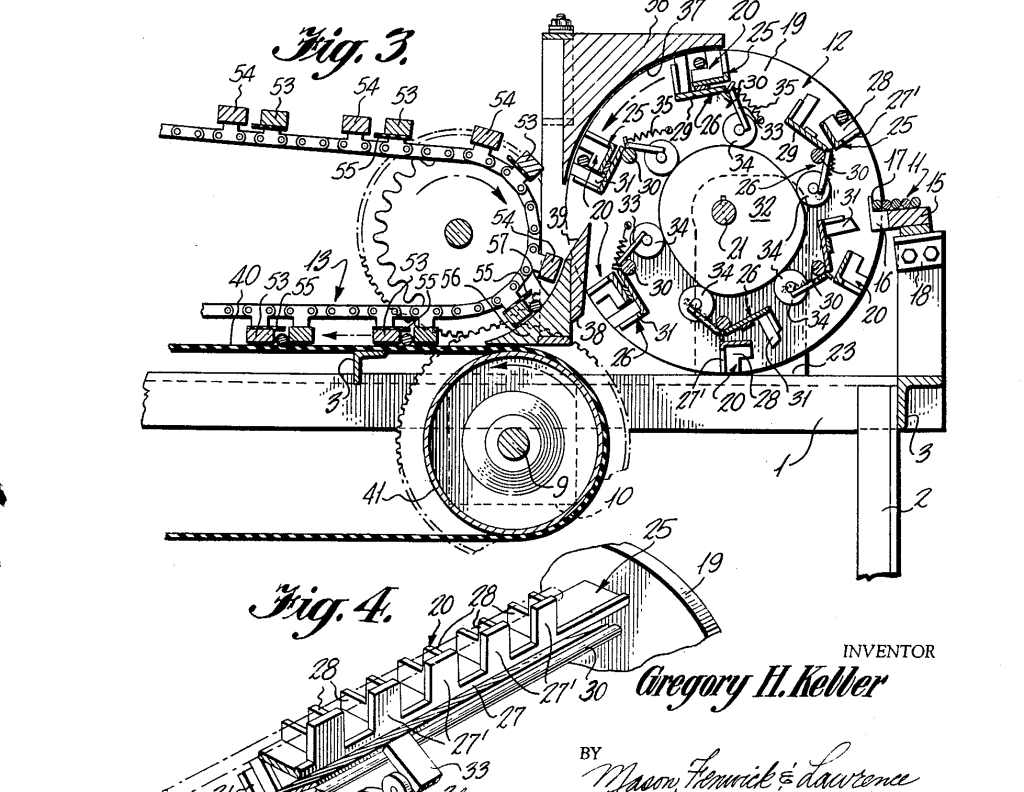 The first reference to candy canes in America was in 1847, when a German-Swedish immigrant in Ohio used them to decorate a spruce. In the 1920s, Bob McCormack began making candy canes as Christmas treats for his local community by pulling, twisting, cutting, and bending them by hand. In the 1950s, McCormack’s brother-in-law George Keller invented a machine to automate the process. Later, McCormack’s descendants developed packaging advances that enabled them to ship the fragile canes far and wide and turned their company, Bobs Candies Inc., into a popular brand. An example of George Keller’s candy cane machine can be found here.

The Invention of Cellophane Tape

In 1923, while working at 3M, inventor Richard Drew invented masking tape and transparent cellophane tape, the first modern pressure sensitive tapes.  Originally, while creating batches of sandpaper for a local auto body shop, he noticed painters were having difficulty masking car parts. He devised a tape of cabinetmaker’s glue which he treated with crepe paper. Automakers found the tape ideal for masking off areas during auto body painting and immediately began to place orders for the tape.

The Invention of Wrapping Paper

Some people say that wrapping gifts first occurred in Asia where it was not uncommon to wrap gifts in decorative fabric cloth.  However, the invention of wrapping paper, as we know it today, started around the 1920s. Before then, gifts in the U.S. were typically wrapped in tissue paper or plain brown paper.  However, after printers started mass producing Christmas Cards and printing technology improved so that paper could be colored, decorated, and folded they started to print colored tissue paper to match the card’s design. Hy-Sill Manufacturing Inc. was the first U.S. gift-wrapping company. Hallmark entered the market in 1917, selling wrapping paper for $0.10 a sheet.

The Invention of the BB Gun

The invention of the BB gun, or air rifle, was frankly a marketing gimmick.  It originated as a windmill marketing promotion in 1886 when the Plymouth Iron Wind Mill Company was struggling to convince farmers to switch from wooden windmills to an iron windmills. Originally, the first air-powered rifle was invented to be distributed for free as an incentive for purchasing the iron windmills.  inventor Clarence J. Hamilton air-powered rifle was distributed by the company as an incentive for purchasing their windmills.

As a result of the marketing promotion, the giveaway, the bb gun, was more successful than the windmill. As windmill sales declined, demand for BB guns skyrocketed. By 1889, the Plymouth Iron Wind Mill Company changed its name to Daisy Manufacturing Company and began manufacturing and selling BB guns full time. The BB Gun patent can be seen here.

Whatever your view of the Holidays or Christmas, we hope you have a Merry Christmas and Happy New Year.