Nike just settled its two-week old trademark battle against “Satan Shoes” seller MSCHF Product Studio Inc. MSCHF is a Brooklyn-based collective of artists and designers which creates artwork in novel and unique ways. For example, one of their projects included selling a virus infected laptop for $1.35 million, selling a dog collar which cursed when the dog barked, a browser extension which lets you watch Netflix while appearing to be on a work call, along with the Satan Shoes. 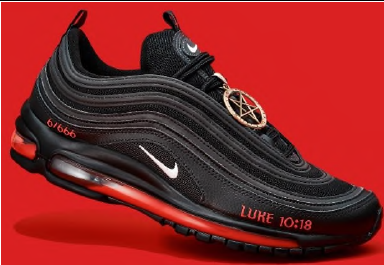 Sales of “Satan Shoes,” ended last week based on a trademark suit by Nike. Above is a picture of the customized Air Max 97 which was purchased lawfully. Demand for customized shoes, watches and even cars has been increasing. Photo Courtesy Pacer

Customizing someone else’s artwork isn’t a new concept. Roman leaders did it to authenticate coins and customize military and artistic creations. In 1953, Robert Rauschenberg erased a drawing by de Kooning and called the new work Erased de Kooning. When MSCHF recently created the Satan Shoe in collaboration with rapper Lil Nas X, they were deliberately creating a Satanic themed shoe. The Satan Shoes came on the heels of the Jesus Shoe (created in 2019) which was an all white Nike Air Max with a white Swoosh and holy water from the Jordan river. They included a biblical reference and a cross on the top of the shoe. Nike never complained about the sales of the Jesus Shoe.

In contrast to the Jesus Shoe, the Satan Shoes was a black-and-red, Satanic-themed shoes, with the Nike “swoosh” logo. The shoes were lawfully purchased Nike Air Max 97 shoes which are sold as a commodity and which had the Nike logo on them. After purchasing the shoes, MSCHF customized them and left the Nike brand elements, including the Nike Swoosh on them. The customization included adding red embroidery with a biblical verse and numbers 666. In addition, the shoes have human blood added to the sole of the shoe along with a pentagram pendent and an upside down cross. Unlike the Jesus shoe, the Satan Shoe customizations with their intentional Satanic references has caused strong consumer reactions from Nike’s customers. 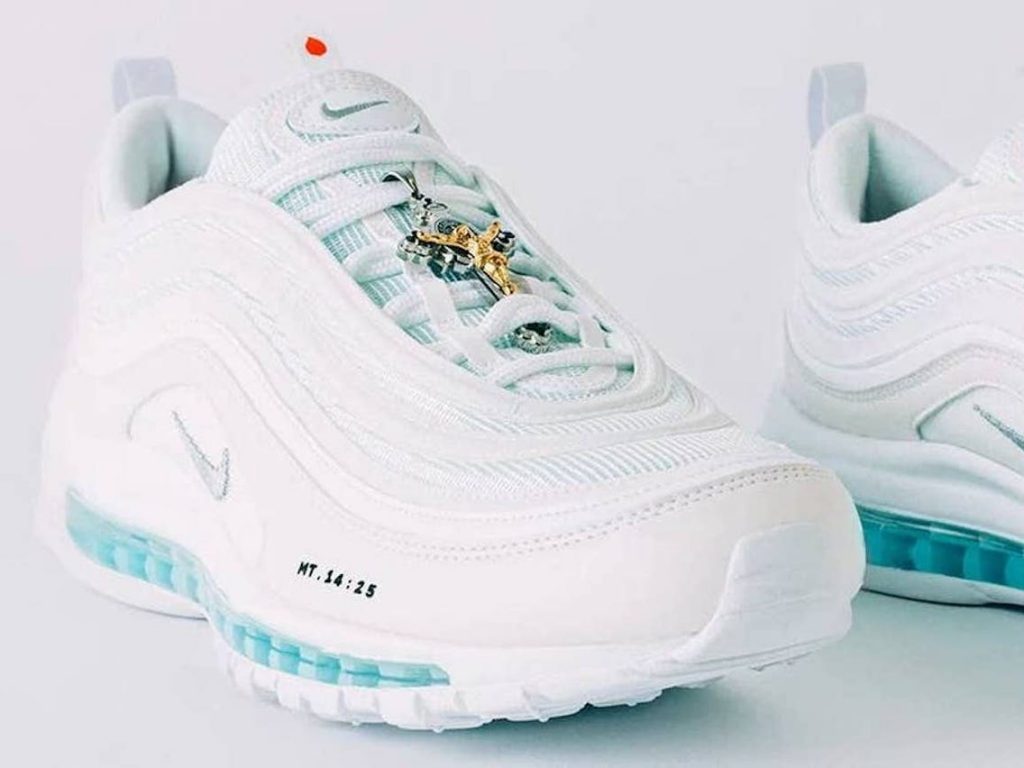 MSCHF’s Jesus Shoe included a white Nike Air Max tennis shoe with holy water, a biblical inscription and a cross on top. Nike did not sue MSCHF for customizing the Air Max and including the Nike Swoosh on the Jesus Shoe.

Demand for customized fashion products is not new but recently, it has been on the rise. According to one report, one in five adults has purchased personalized clothing and one in seven has purchased personalized fashion accessories. Consumers are looking for something unique which is a representation of ourselves or our lives. Some examples of customization include shoes, clothing, fashion accessories like watches or jewelry and even cars. Technology has helped with this through the mass customization marketplaces which provide print on demand merchandise and instant virtualization of the custom products. These sites include Etsy, CafePress, Zazzle, CustomInk, Spring, TeeChip, TeePublic, SunFrog, Spreadshirt, RedBubble, Printify and AllPosters.com. These sites are part of a multibillion-dollar global customization industry, with products extending from T-shirts and hoodies to underwear, posters, mugs, housewares, backpacks, wristbands, and even jewelry. As consumer demand for product customization has risen, so has the number of artists and designers involved in applying their talents to these customized products. Many of these sites have been a source of copyright and trademark problems.

Many customers are demanding customized products which share the same quality from known brands they are familiar with. For example, MSCHF recently created a custom Birkenstock sandal which sold for $76k because it was made from a real Hermes Birkin handbag. Consumers seem to favor the customization using trusted product brands. However, customizing popular branded products can create Trademark and Copyright issues for the unwary artist or designer. For example, One artist who sold reconditioned Rolex Watches which he customized found himself at the subject of a trademark infringement case. Another musical artist who customized his own Ferrari with a vinyl wrap found himself in hot water from Ferrari and ended up unwrapping his own car.

The customization of a product purchased lawfully implicates both Copyright law and Trademark Law.

Nike’s main points in the lawsuit were that, although the Nike Air Max was lawfully purchased, the alterations of MSCHF to the shoe were so severe that the shoe no longer represented an authorized Nike Air Max. In addition, Nike believes that the continued use of the Nike branding on the Satan Shoe did and would continue to dilute Nike’s brand and suggest to Nike’s consumers that there was some sort of association between Nike and the Satan Shoe.

In order to prevail on its trademark infringement and unfair competition claims, Nike would need prove that the MSCHF’s actions created a “likelihood of confusion” regarding the origin of the shoes offered by the MSCHF. In this lawsuit, Nike argued that actual confusion was already taking place.

There are a number of defenses which MSCHF could have raised.

MSCHF could have raised the first-sale doctrine is a defense to Nike’s claim of trademark infringement. Under the first-sale doctrine, “when a retailer merely resells a genuine, unaltered good bearing a trademark or brand, the use of the trademark by the reseller will not deceive or confuse the public as to the nature, qualities, and origin of the good. Instead, the consumer gets exactly what the consumer bargains for, the genuine branded product. Thus, resale by the first purchaser of an authentic article bearing the legitimate trademark is generally neither infringement nor unfair competition.

The first sale doctrine, however, does not apply to products which have been materially altered from their original form. An alteration is material if it changes something about the product which is relevant to consumers’ purchasing decision.

Descriptive fair use is the other. This is where the infringer uses the mark to help describe its own product. This is typically the case when the particular trademark has some descriptive component.

Probably the best argument for MSCHF would be to invoke the free speech considerations. when free speech considerations come into play they can override the brand owner’s trademark rights. The First Amendment to the U.S. Constitution provides that “Congress shall make no law … abridging the freedom of speech.” Parody has been recognized as a form of artistic expression, and, where artistic expression is involved, “the public interest in avoiding consumer confusion must be balanced against the public interest in free speech.” Thus, the First Amendment right to freedom of speech can override the Trademark Owner’s goals of protecting their brand. If the Satan Shoes were found to be an “expressive” work protected by the First Amendment , the brand owner may need to prove that MSCHF’s use of the mark is either

No Likelihood of Confusion

Finally, if the suit has continued, MSCHF could have argued that there simply was no likelihood consumers would have confused the MSCHF’s customized Satan Shoes with the standard Nike Air Max tennis shoes produced by Nike. The fact that the shoes were being sold for over $1,000 there is a strong likelihood that no purchaser would have believed these were standard Nike shoes. However, Nike already provided significant evidence that some consumers actually believed the shoes were associated with and sold by Nike.

If you have questions about trademarks or how brand protection works, contact one of our trademark attorneys.