The Duchess of Sussex a/k/a Meghan Markle has recently been in the news.  In a recent interview with Oprah, the royal family member and American actress aired personal concerns and conversations within Britain’s royal family.  The interview provided insight for many Americans into the royal family.  However, the Duchess also made the news recently for a Copyright Infringement dispute against a British Tabloid.  In her copyright lawsuit, she claims the British tabloid published portions of her personal letters, without her permission.  The British Court vindicated the Duchess with a favorable ruling, requiring the Tabloid to run a headline of the ruling in its paper. 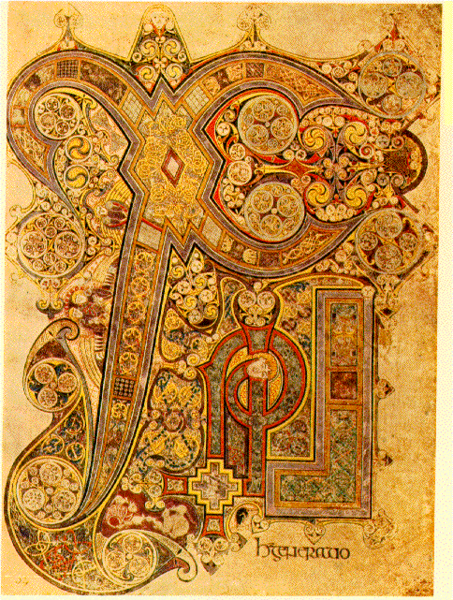 Copyright Infringement Disputes have been around since written and visual works have been created. In some cultures they have resulted in violent and bloody disputes. Others, consider the reproduction as honorable and virtuous. Modern Copyright law attempts a balanced approach. Image created by unknown Irish or Scottish monks, Public domain, via Wikimedia Commons.

However, copyright infringement disputes have not always been polite or even civil.  The historical disputes involving copyright of books and other written works reflects a balanced approach currently favored by many courts around the world.  On one hand, copyrighted works contribute to the growth of society.  On the other hand, society should reward the contribution of the individual for their contributions. 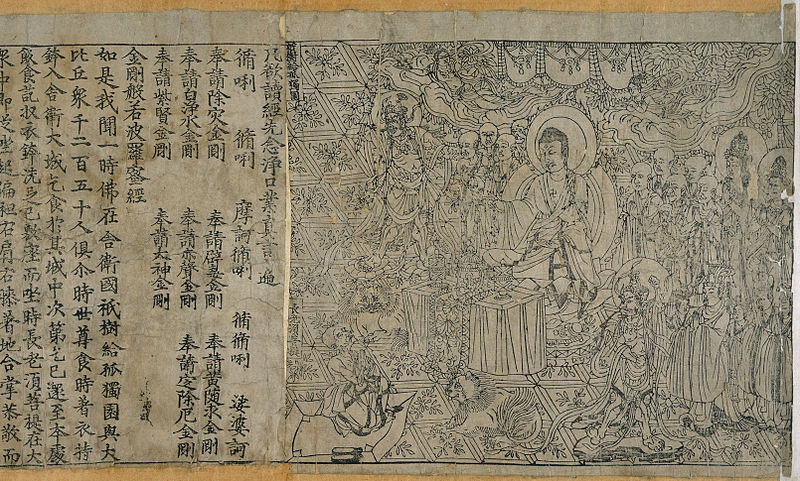 The Diamond Sutra is credited as the first printed book which is donated to the public domain, to help society. Image Courtesy British Library, CC0, via Wikimedia Commons

In contrast, in Ireland a dispute over ownership of the Cathach is credited with having a profound and long lasting effect on Irish Christianity, sparking a war, and dividing two ecclesiastical institutions. The Cathach is one of the earliest Irish illuminated manuscripts which was claimed to be written by St. Columba during the sixth century.  It is the second oldest collection of Psalms and includes Psalms 30:10 through 105:13 in Vulgate Latin.  The Cathach includes headnotes which are written in gaelic and includes artistic celtic-lettering.  For centuries, the Cathach or Battler, was carried into battle by leaders of the O’Donnell clan in Ireland where it was used as a talisman for victory. 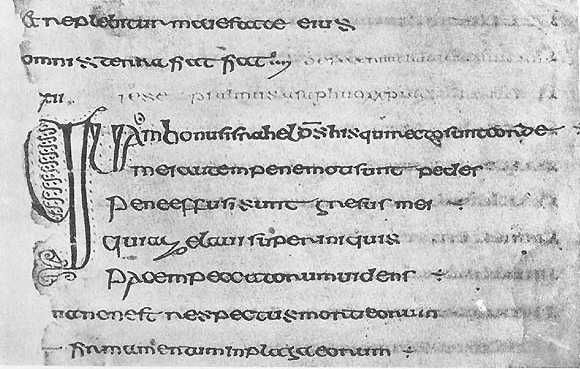 A depiction of the Cathach from the 6th Century which was the subject of one of the first copyright infringement disputes which ultimately resulted in a bloody battle leaving nearly 3,000 dead. Image courtesy of Cathach of St Columba, Public domain, via Wikimedia Commons

The Battle of the Book (Cul Driemhne) occurred around 560 AD.  It was the result of a dispute regarding ownership of a biblical translation.  The translation, the Cathach, was created by a student, Colmcille.  Colmcille was a student of Finnian.  Colmcille created the Cathach from a copy of a bible which his teacher, Finnian, owned.  The dispute was one of bloodiest and first copyright disputes ever brought.  After learning that Colmcille made an unauthorized translation, Finnian, demanded that Colmcille handover the Cathach.  Upset over Colmcille’s refusal to handover the Cathach, Finnian petitioned the High King of Ireland, King Diarmait, to intervene.

As a result of Finnian’s request, it is believed that the first Copyright Infringement trial was held in Ireland, with lawyers representing both parties.  Finnian’s lawyers argued that Finnian owned the original manuscript and therefore owned any copies or translations made from it.  This argument is similar to a right of reproduction and derivative rights argument.  Colmcille’s lawyers argued that since Colmcille did the work translating and transcribing Finnian’s book, Colmcille owned the Cathach, the translated reproduction.  This argument was similar to a sweat-of-the-brow type argument.

After the hearing, the king ruled, “[t]o every cow belongs her calf, therefore to every book belongs its copy.”    The king ruled that Colmcille should turn-over his translation to Finnian.  Angry with the king’s ruling, Colmcille enlisted the O’Neill clan to help him rise up and defeat King Diarmait.  As a result of The Battle of the Book almost three thousand died and Colmcille was exiled.  Colmcille, left Ireland with his Cathach in hand.  Today, surviving pages from the Cathach can be seen hanging in the Royal Irish Academy in Dublin, Ireland.

In 1783, before America’s constitution, Connecticut created America’s first copyright law.  Just a few years after winning its independence from Britain, Connecticut created its first copyright law in 1783.  Connecticut passed its copyright law based on the British Statue of Anne.  The Statute of Anne embraced the balance of rights of authors versus claims of the public domain.  The Connecticut Copyright law was based on the Statue of Anne and was created from Noah Webster’s desire to protect his American Spelling Book.  The U.S. Constitution, written in 1787 embodied Statue of Anne’s balance which gave to authors and inventors the rights to their writings and discoveries for a limited time in favor of the public domain over time.

If you have questions about copyright law please contact our firm to schedule an appointment.