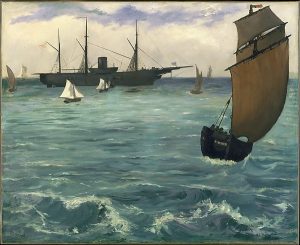 On March 23, the U.S. Supreme Court held that a state cannot be sued for copyright infringement.  The basis for the Court’s ruling dates back to 1718 and involves the pirate, Edward Teach (aka Blackbeard). In 1718, Blackbeard’s ship sank off the coast of North Carolina. The wreckage was discovered 300 years later, in 1996.   A company was hired to photograph and film the wreckage and the photographs and videos we registering with the U.S. Copyright Office.

Article 1 of the U.S. Constitution, “promotes the Progress of Science and useful Arts, by securing for limited Times to Authors and Investors the exclusive Right to their respective Writings and Discoveries.” Article 1 provides Congress with the necessary authority to remove sovereign immunity from copyright suits. The Court agreed that there is no difference between copyrights and patents under the Intellectual Property Clause of Article 1, nor any material difference between the two statute’s provisions and thus under Florida Prepaid attempts to limit the states sovereign immunity are unconstitutional.   Additionally, although the Fourteenth Amendment sometimes cares about copyright infringement, the CRCA fails the “congruence and proportionality” test because the law’s “indiscriminate scope is out of proportion to any due process problem,” the Court wrote.

In maintaining the Court’s decision to provide immunity to the States, the Court stated that its ruling should not be read as barring Congress from enacting a new version of the law, perhaps a “tailored statute to effectively stop states from behaving as copyright pirates.”