Trademark Law protects a business from unlawful competition by preventing consumer confusion.  Trademarks can be a word, symbol, phrase, sound, scent, packaging or look and feel used to distinguish a particular manufacturer’s or seller’s products from the products of another. 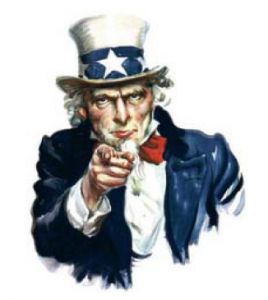 Trademark applications are reviewed for compliance with trademark laws and for confusion with other marks before a trademark is registered. However, a trademark will often be refused if is contains a symbol which is recognized as an insignia, flag or symbol of the United States.

Generally, images are considered visual works of art which are covered under copyright law.  However, to the extent the image can act as a source identifier for a good or service, they can also function as a trademark.  Commonly, a business will create a logo.  The logo is an image which can qualify for both copyright protection and trademark protection.  When it comes to images of characters, they can also be protected under copyright and trademark law.  To the extent a character can be used to identify, is distinctive and non-functional it can be protected as a trademark.  Think of Mickey Mouse, Bugs Bunny and Batman.  Three very famous characters and three very valuable trademarks.  They are the subject of numerous films and as such are certainly copyrighted.  But each of these characters are also used by their companies on various products and merchandise readily recognized by consumers and as such, also function as a trademark.

Recently, a German sporting goods company applied for a trademark covering an image depicting a character commonly referred to as Uncle Sam for games, foods and drinks.  However, the trademark office denied the registration.  The trademark office indicated that the character mark was not distinctive.  In rejecting the application, the examining attorney claimed that the mark did not function as a mark because of the iconic nature and cultural significance of the Uncle Sam character.

The character, sought to be registered was based on a design of an older man pointing a finger which was created by James Montgomery Flagg in 1917 as a military recruiting ad.  Even though the character has not been an official insignia, the character has been referred to as a symbol of patriotism and a personification of the  United States government.

Since the Flagg image of Uncle Sam was first created, it has been used on a large number of products and services for advertising purposes and has even been registered as part of a trademark for a number of different goods or services.

However, the TTAB refused to register the mark for the German sporting goods company claiming that the company’s proposed use would not likely be perceived as identifying and distinguishing its products and indicating their source.  We do not know whether the fact that the company seeking registration was German had an impact, but the fact that other marks were allowed in the past suggests that the German based application was subject to greater scrutiny.

If you would like to register a trademark, please contact one of our trademark attorneys to discuss filing a trademark application with the trademark office.