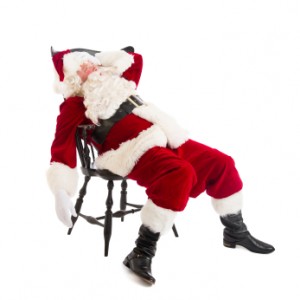 It seems like Christmas is getting earlier and earlier, with Santa holiday advertisements appearing even before Halloween or Thanksgiving.  With Santa appearing so often and so long, overpowering almost every other holiday, one has to wonder who owns Santa.  I don’t mean the spiritual visitor, but the name and image Santa Claus which we see so often and for so long around the holidays.  Well, your first response, is why would someone even spend the time to think about these things, but admittedly, as Trademark Attorneys we think differently than most people.  So, now that we are talking about Santa, lets get down to who owns the right to use the name or image Santa Clause in a commercial sense.

Under Trademark Law, a word, phrase, slogan, symbol, or design, or combination of these things when used in connection with a good or service can be protected and the protection continues for as long as the mark is in commercial use.  So the name Santa or Santa Clause if used in connection with the sale of a good or a services can be protected.  In fact, the name “Santa” has been registered in the United States over 1600 times with over 3000 applications made for some form of Santa and covers everything from clothing, toys, chocolate, phone calls, saws and adult novelty items.   Santa and his elves have truly been busy.

Trademark law is meant to protect against consumer confusion while providing a source identifier for the good or service.  One may argue that any use of Santa, by anyone other than the jolly old guy up north, does create confusion as to the source of the good.  With so many “Santas,” out there how can a consumer truly identify what is being delivered by sled on Christmas night and what will be coming in the mail with a brown paper tag.

In addition, to the name of Santa, the image of Santa is widely used in connection with a variety of products.  In the U.S. alone, there are approximately 150 images of Santa trademarked with another 70 waiting to be registered.  These images are used on everything from cards to soda pop, music, holiday events and adult oriented items.  In fact, the image of Santa, at least in the U.S., dates back to the 1800’s and became commercially popular after Coca-Cola started to use an image of Santa in their winter advertising in the 1920s.  Ultimately, the use of the image of Santa has become so widespread that I am not sure that it alone functions as a source identifier or protectable image under Trademark Law.  While Copyright Law still provides protection for each work of “art,” its ability alone to operate as a source identifier would seem a little challenging.  As a result, most trademark registrations in the U.S. include not only the image of Santa, but other elements such as words or other graphical elements which together might be distinctive or protectable as a trademark or service mark.

So with that trademark question being answered, we can get back to putting away our Santa coffee cups along with the rest of our holiday decorations and enjoy the New Year.  Happy New Year from all of us at Intellectual Property Center.