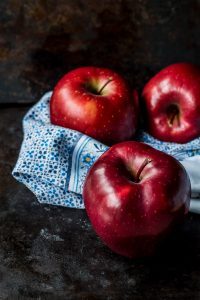 While these three apples may appear to be the same, branding can differentiate them in the eyes of the consumer. In trademark cases, real beliefs and opinions of actual consumer are extremely relevant. Consumer surveys are typically the only way to introduce these opinions in a trademark case.

Trademarks represent a company’s brand.  A sign of a successful company is often related to the strength of its brand.  Strong brands can often add value to a company.  In some cases, the value of a brand is greater than the book value attributable to its sales.   Damage to a brand which can cause consumers to have a strong reaction, can devastate a company.  Brands can also suffer from damage cause by competitors anti-competitive behavior.

For example, if a company uses a competitor’s brand in such a way that it causes consumer confusion, the value to the brand suffers.  Some anti-competitive consumer confusing examples include offering low quality products, offering products for lower prices, flooding the market with similarly branded products such that the consumer no longer perceives the brand as being associated with one company.  If a competitor causes harm to a brand owner, they may be liable for trademark infringement.

In bringing a trademark infringement case, brand owners have typically offered three types of evidence to prove that consumer confusion is likely:

Expert Witnesses can testify about their opinions and beliefs of what a typical consumer may believe based on their research but such testimony does not typically represent the actual belief of the consumer.  In addition, Expert Witnesses typically result in a “battle of experts” in which the highest priced expert wins.

A consumer survey is basically a statistical statement which summarizes the results from a list of questions submitted to actual or potential consumers of the product or services at issue.  The summary statement, or consumer survey, should reflect the actual beliefs and attitudes of real consumers.  The consumers are often questioned in person, over the phone and over the internet. Depending on the desired methodology, Consumer Surveys may utilize a Squirt Format or an Eveready Format.

Consumer Surveys in Trademark Cases can be very helpful to prove likelihood of consumer confusion based on statistical evidence of real consumers. The surveys are used to convince courts about what actual consumers believe and are often the only way of presenting direct evidence in court about real consumer beliefs and reactions to the brand related issues in a trademark infringement case.  Because consumer surveys are the only real evidence typically available in a trademark case, it is not shocking that courts and the trademark office relies heavily on such evidence.

To be admissible, a consumer survey almost always requires expert testimony becasue conducting a survey entails expertise and professional judgement and to allow an expert witness to testify they must be disclosed in advance.

If you there is a dispute regarding your brand you should contact one of our trademark attorneys to discuss your available options and the effectiveness of using a consumer survey in trademark cases.