Cartoon characters are everywhere these days. In movies, video games, television, software, toys, blankets, food, beverages and clothing just to mention a few. Many of these are based on a fictional character which was originally created as part of a graphic work like a comic book. From a value perspective, these characters are assets for large media companies and represent billions of dollars in revenue. According to some reports the top-ten fictional characters grossed more than $25 billion in 2003. Media giants like Disney, Viacom and Hallmark are some of the largest companies who have cartoon characters but most video game makers, media companies, and toy makers such as Mattel and Hasbro are also involved. 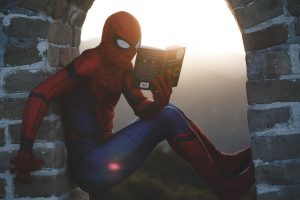 Under traditional copyright law, the original work associated with a graphic novel is often a book or magazine which includes pictures and text. Pulling out a character from a picture in the book and giving it “life” isn’t traditionally covered as the original work. In addition, the comic book is often a joint work with an illustrator creating the visual characters and the writer creating the story or plot.  In some cases, the writer describes the comic characters.  Creating a comic book may generate questions about who is the author of the character.

Once the character has been given “life,” the character may have enormous value not just as a character in a comic book, but may include other media formats and merchandising activities.  The comic character may be protected based on copyright and trademark law.   In some cases, these rights extend to the character’s likeness or uniqueness; a name, physical appearance, and attitude or character traits outside the comic book or film including toys, games, software, along with other products and services.

Generally, to protect a cartoon character against someone attempting to misappropriate it, the law utilizes a combination of copyright, trademark and unfair competition laws.

In the United States Copyright law a protectable work must be original and must be fixed in a tangible medium. You cannot copyright mere ideas or facts, but only the tangible expression of those ideas or facts. Copyrights protect the created cartoon characters 70 years beyond the life of the artist. In some cases, the term may expire 95 years or 120 years depending on the nature of the authorship.

Figuring out how to Copyright Cartoon Characters is not clear.  While the Library of Congress allows for protection of Cartoons and comic strips. This protection extends to any copyrightable pictorial or written expression contained in the original work like a drawing, picture, depiction, or written description of a character. So you may copyright cartoon images or copyright cartoon picture. Protection does not, however, extend to the title or general theme for a cartoon or comic strip, the general idea or name for characters depicted, or their intangible attributes.

While Cartoon Characters are not specifically identified as protectable under Copyright law, the Courts protect these characters as a part of the larger work and not as independent creations. Historically, they were regarded as ‘components in a copyrighted works’ and eligible for protection as a component.  Under this theory, copyright protection extends beyond the mere expression of the character to the character’s physical appearance, the specific name, physical appearance, and character traits of that character.

Recognition of characters as independent works separate from the plot in which they were embodied originally resulted from a court case in 1930.  Today, the courts typically utilize two main tests to determine whether a cartoon character in a work is eligible for copyright protection

Under either the Well-Delineated Test or the Story Being told Test, the critical issue in determining if protection exists is whether the particular character is sufficiently and distinctively expressed so that it warrants protection as something more than merely an idea. Copyright law does not protect ideas from infringement, only the expression of those ideas. Therefore, specific types of characters is not protected. While a court won’t prevent others from creating a character with a particular super power, they will protect the specific expression of Superman and Batman. Therefore, the best way to protect a graphic character under copyright law is to ensure that the character’s appearance and personality are specific and unique.

Another way to protect a cartoon character, is to protect it under trademark and unfair competition law. Federal, state and common law protection will protect the cartoon character from unauthorized use by another when the character functions as an identification and receives general acceptance by the public as an identification of a brand.  This protection could prevent not only the exact duplication of the trademark owner’s character but also the imitation of that character where the use would be likely to cause public confusion, mistake or deception with regard to the source of the products or services. The scope of trademark protection is based on federal trademark law, state common law for trademarks or unfair competition, or under relevant sections of the Lanham Act which protect against false designations of origin.

Trademark law will allow protection of the cartoon character not as a character but to the extent the character’s name and likeness function as a trademark to indicate the source of a product or service.

Unfair competition laws at both the state and federal level provides protection for someone who has created a name or symbol used by the public to identify their goods or services.  Unfair Competition generally involves a variety of different causes of action that fall within three categories of actions:

In some cases, to bring an unfair competition claim, the injured party must claim that their character was wrongly associated with another’s product, service, person, or company.

Additional Protections for Cartoon Characters may also be based on the Right of Publicity and Trademark Dilution.

Right to Publicity: The right of Publicity has traces it roots to tort of trespass and includes the tort of right to privacy.  Generally, it prevents others from from commercially exploiting one’s name and likeness.